The ALIPH Foundation, the International alliance for the protection of cultural heritage in conflict areas, supports the site's protection 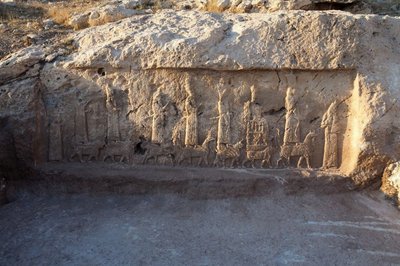 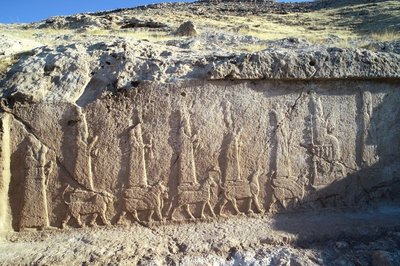 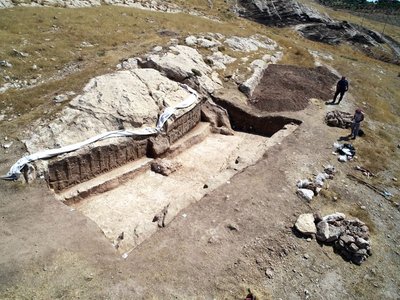 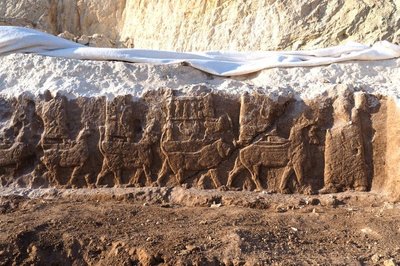 The archaeological discovery of ten monumental rock reliefs from the 8th century BCE depicting the ruler and great gods of Assyria in the archaeological site of Faida (20 km south of the city of Duhok and 50 km from Mosul, northern Iraqi Kurdistan), in the framework of the Kurdish-Italian Faida Archaeological Project conducted by the University of Udine and the Duhok Directorate of Antiquities, has won the 2020 “Khaled al-Asaad” International Archaeological Discovery Award.

The international jury of the award, now in its sixth year, judged the discovery to be the most important archaeological find made in the world in 2019. Daniele Morandi Bonacossi, professor at the Department of Humanities and Cultural Heritage of the University of Udine, will receive the 2020 “Khaled al-Asaad” International Archaeological Discovery Award on November 20 in Paestum, Italy on the occasion of the XXIII Mediterranean Exchange of Archaeological Tourism.

The importance of this archaeological discovery made by the University of Udine has also been recognized by ALIPH, the only global fund exclusively dedicated to the protection and rehabilitation of cultural heritage in conflict zones and post conflict areas, which financed the documentation of the Assyrian reliefs of Faida and the development of a conservation and protection project for this monumental rock art complex, seriously threatened by vandalism and the expansion of the productive activities of the nearby village.

“For over 25 years our university has been operating in the Near East, first in Syria and now in Iraqi Kurdistan, with a team of archaeologists, students and specialists from various disciplines led by Prof Morandi Bonacossi – says the Chancellor, Roberto Pinton. The important recognitions received today are the result of the full and confident support of the entire Department, the University, of all previous chancellors and of an entire regional and national system. For the University of Udine, this award for the exceptional discovery of the Assyrian reliefs of Faida is a source of great pride and satisfaction, as is too the important funding from ALIPH. The support that the University of Udine project has obtained will guarantee the protection and conservation of this Universal Cultural Heritage".

"The award of the illustrious prize of the Mediterranean Exchange of Archaeological Tourism named after Khaled al-Asaad to the discovery of the Assyrian reliefs of Faida and the new collaboration with ALIPH, which has the goal of protecting these extraordinary rock art monuments – comments Daniele Morandi Bonacossi – are very important achievements for our project, the result of close collaboration with colleagues and authorities in Kurdistan, and the systemic synergy between our University, the Ministry of Foreign Affairs, the Friuli Venezia Giulia Regional Authority, the Friuli Foundation and ArcheoCrowd, to which ALIPH is now added. These two recognitions reinforce the belief that the University of Udine, seat of the first department in Italy dedicated to the history and protection of cultural heritage, can and should make an important international contribution to the study, documentation, protection and enhancement of humanity's cultural heritage that is threatened by conflict and degradation. The support of ALIPH, in fact, will make it possible to develop a project for the protection and conservation of the Assyrian reliefs of Faida”.

“The Faida salvage project embodies many of ALIPH’s values, namely, concrete action to protect a unique heritage site that has been threatened by conflict. The success of this project, coordinated by the team at University of Udine and led by Professor Morandi Bonacossi, is the result of several years of involvement and collaboration with local communities, authorities and experts – states ALIPH’s Executive Director Valéry Freland. To be awarded the “Khaled al-Asaad” International Archaeological Discovery Award for the Faida reliefs is confirmation of their value and significance, and ALIPH warmly congratulates the entire team on this prize. Once the work to evaluate and limit the damage to the site is complete, we look forward to the planning and execution of the full protection of the archaeological complex. ALIPH supports this important project that not only improves our understanding of one of the key moments of the human past, but also contributes to setting the bases for a sustainable cultural, social and economic post-war recovery in Iraq.”

"The assignment of the 2020 "Khaled al-Asaad" International Archaeological Discovery Award to Prof Daniele Morandi Bonacossi for the discovery of the Faida Assyrian reliefs – declares the Regional Councillor for work, training, education, research, and universities Alessia Rosolen – is a source of pride and success for the entire Friuli Venezia Giulia Region. We have supported since the beginning the important Land of Nineveh Archaeological Project, not only from a purely scientific perspective, but also in relation to growth in the reputation of our country and in particular of our regional system. We strongly believe that interest in and support for archaeological research allow us to go back to the roots and origins of our modern history. The constant synergy established between the University of Udine and the FVG Region has greatly contributed to strengthening our cultural and humanitarian cooperation in the complex reality of northern Iraq and Iraqi Kurdistan".

"The Friuli Foundation, which has been working alongside the University of Udine since 2005 in support of its archaeological research projects, first in Syria and then in Iraq – says President Giuseppe Morandini – is proud of the international award assigned to Prof Morandi Bonacossi for the discovery of the Faida Assyrian reliefs and the support guaranteed by ALIPH for the protection of this unique rock art complex. This success demonstrates that the University of Udine, founded in 1978 at the wish of the people and institutions of Friuli, with the support of the entire regional system, has been able to establish itself as a leader in scientific research, international cooperation and the protection of cultural heritage threatened by conflicts".

"ArcheoCrowd – declares its president Francesco Zorgno – is proud to be part of the team that made this project possible. The great significance of this award will be an important stimulus to private entrepreneurs who, like us, intend to assist the public in supporting archaeological research".

With the Faida reliefs, the other four archaeological discoveries of 2019 that contended for the 2020 Award were: Cambodia, the lost city of Mahendraparvata, capital of the Khmer Empire in the forest on the hills of Phnom Kulen, north-east of Angkor; Motza (Israel), 5 km north-east of Jerusalem, a 9,000-year-old Neolithic metropolis; in Rome in the Domus Aurea has revealed a new treasure: the Sphinx Room; again in Italy, in the ancient city of Vulci, a 6th century BCE Etruscan statue representing a winged lion was unearthed.

The "Khaled al-Asaad" International Archaeological Discovery Award, named after the Syrian archaeologist who in 2015 paid with his life for defending the cultural heritage of the site of Palmyra, is the only international recognition dedicated to archaeologists who with sacrifice, dedication and scientific competence face every day their double role as scholars of the past and professionals striving to protect cultural heritage at risk. The prize is awarded in collaboration with the international media partner newspapers of the Mediterranean Archaeological Tourism Exchange: Archeo (Italy), Antike Welt (Germany), Archéologia (France), as. Archäologie der Schweiz (Switzerland), Current Archaeology (United Kingdom), Dossiers d’Archéologie (France) and British Archaeology (United Kingdom).

In addition to the International Archaeological Discovery Award, a "Special Award" has also been granted to the Faida rock reliefs, which have been the archaeological discovery that has received the greatest consensus from the general public through the Mediterranean Exchange's Facebook page.

Based in Geneva, the Swiss Foundation ALIPH also has the status of an international organization. It was founded in March 2017 on the initiative of France and the United Arab Emirates in response to the massive destruction of exceptional cultural heritage. It provides concrete support for the protection and reconstruction of cultural heritage in conflict zones and post-conflict situations, and financially assists associations, foundations, academic, cultural and heritage institutions, and international organizations. Its three areas of intervention are: preventive protection to limit the risks of destruction, emergency measures to ensure the security of heritage, and post-conflict actions to enable local populations to once again enjoy their cultural heritage. Last July, the University of Udine was awarded an ALIPH Emergency Relief Grant to lead the "Faida Salvage Project".

In the summer and autumn of 2019, the joint Italian-Kurdish mission identified ten monumental rock reliefs from the Assyrian period (8th - 7th century BCE) carved into the rock along an ancient irrigation canal 8.5 km in length at the archaeological site of Faida. The Faida canal, at the base of a hill and fed by a system of karst springs, was probably built by the Assyrian ruler Sargon II (721-705 BCE)  Today, the canal, which has an average width of 4 meters, is almost completely buried under thick layers of earth deposited by the erosion of the hillside. Smaller canals branched off from the main canal, allowing irrigation of the surrounding fields and increasing agricultural production in the countryside around Khorsabad and Nineveh, the last two capital cities of the Assyrian Empire.

The panels found are impressive, almost 5 meters long and 2 meters high. An extraordinary collection of gods and sacred animals is depicted on the rock surface. The divine figures represent the god Ashur, the main deity of the Assyrian pantheon, on a dragon and a lion with horns; his wife Mullissu, seated on an elaborate throne supported by a lion; the god of the moon, Sin, also on a horned lion; the god of wisdom, Nabu, on a dragon; the sun god, Shamash, on a horse; the storm god, Adad, on a lion with horns and a bull; and Ishtar, the goddess of love and war, on a lion. The reliefs, repeated in ten examples (and others are probably still buried under the debris that fills the canal), were made by the Assyrian ruler to celebrate the construction of the irrigation canal. The carved bas-relief panels represent a scene of profound religious and ideological significance centred on the king's worship of the deities by the king – and celebrate the creation of this important hydraulic infrastructure designed to ensure fertility and enhanced agricultural productivity in the surrounding area.

Daniele Morandi Bonacossi and Hasan Ahmed Qasim, from the University of Udine and the Duhok Directorate of Antiquities respectively, direct the Kurdish-Italian Faida Archaeological Project (KIFAP). The excavation of the Assyrian reliefs of Faida takes place in Northern Mesopotamia, a region of great historical significance but unexplored for decades due to the complex political situation and instability that have characterised it until recent years. Research, protection, conservation, enhancement, training and international cooperation are the keystones of the project, which is also supported by The Republic of Iraq, The Kurdistan Regional Government - Iraq, Ministry of Foreign Affairs and International Cooperation, Italian Consulate in Erbil and Italian Embassy in Baghdad, Ministry of Education, University and Research, Friuli Venezia Giulia Autonomous Region, Friuli Foundation, ArcheoCrowd Ltd and Italian Agency for Development Cooperation.